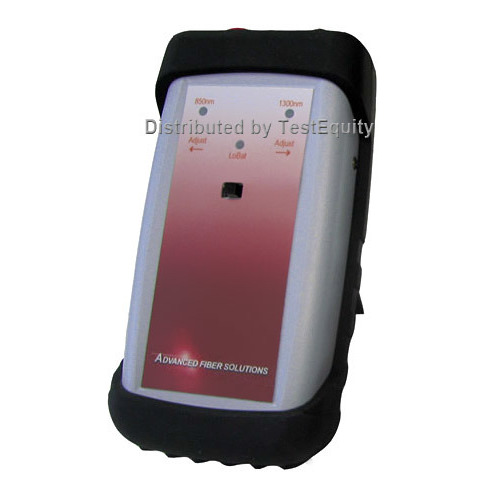 The OS400/AF-OS400N series sources offer a complete line of sources for any testing application. Whether testing outside plant or premise an OS400 series optical source will be perfect when combined with an OM100 or OM200 series optical power meter. On each source all wavelengths are individually adjustable, with the exception of the OS405, allowing the user to use less battery power when high optical output power is not necessary, or to turn up the power to test long runs. This also makes it possible for the OS420 LED source to test single-mode cables up to 5km at 1300nm.

AF-OS405 Visual Fault Locator
Application for the AF-OS405 Light Source includes finding faults in fiber optic cables, even in the OTDR dead zone, optimizing splices and tracing fibers. By injecting a bright red visible light in the fiber, locations of losses such as breaks, bends, or bad connectors can be detected visually. Includes Pouch, Data Sheet, and batteries.

AF-OS417MD POF LED Source
The AF-OS417MD is optimized for POF (Plastic Optical Fiber) and larger core multimode applications when transmitting at 660nm. When operating at 850nm, the AF-OS417MD can be used for testing Ethernet, Gigabit Ethernet, and other multimode LAN systems. Includes Pouch, Data Sheet, batteries, and trim tool.

AF-OS420 LED Source
The AF-OS420 light source is designed for premises and campus cabling networks with multimode fiber, or single-mode fibers under 5km. The ST connector outputs can be adapted to any cable plant with hybrid adapters or hybrid cables. The OS420 becomes a powerful low cost troubleshooting and maintenance tool when used with an AF-OM120 or AF-OM220 power meters. Includes Pouch, Data Sheet, batteries, and trim tool.

AF-OS430 Laser Source
The AF-OS430 Laser source is designed for testing single-mode fibers in the outside plant environment where long wavelengths are used. The Single output allows the user to test at both 1310nm and 1550nm without disconnecting and reconnecting the cable. When used with an AFS AF-OM120 or AF-OM220 the AF-OS430 is ideal for testing insertion loss for single-mode fiber optic cables and connectors.

AF-OS430N Laser Source
The AF-OS430N Laser source is designed for testing single-mode fibers in the outside plant environment where long wavelengths are used. The LED output is stabilized to ensure accurate test results per current TIA/EIA requirements. Whether testing outside plant or premise an OS400N series optical source is the perfect tool when combined with an OM120N-I series optical power meter.