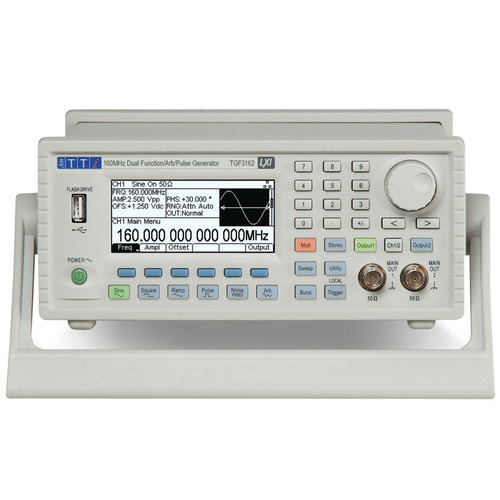 Two Identical Channels with Phase Control, Coupling and Tracking
The TGF3162 function/arbitrary generator offers signal generation capability at 160 MHz on two identical full performance channels that can operate independently or in coupled or tracking modes. Precise channel to channel phase control with a resolution of 0.001° is provided. (Note that external trigger and external modulation inputs are shared.)

Custom Arbitrary Waveforms
Custom arbitrary waveforms of 16 bit vertical resolution and up to 8192 points can be defined and replayed at sampling rates up to 800MS/s.

Remote control via USB and LXI compliant LAN (standard) can be supplemented by optional GPIB if required.

Waveform editing software
The TGF3162 is supplied with Waveform Manager Plus software for Windows. This PC software enables complex arbitrary waveforms to be created and edited. Waveforms can be built in any number of sections using any combination of standard waveforms, mathematical expressions, drawn waveforms, uploaded waveforms, imported waveforms and existing stored waveforms.

Waveforms can be transferred to the generator using either the Flash drive interface or the bus interfaces.

Built-in Waveforms
A large number of standard and pre-built arbitrary waveforms are built into the generator. These include triangles, ramps, sinc, logarithmics, exponentials, gaussians and cardiac (among others).

High Resolution Pulse Generator
The pulse generator function offers an exceptionally high pulse width resolution of 100ps over a period range from 50ns to 1000s. The pulse edge speed is fully variable from 10ns to 1ms. Pulse jitter is dramatically lower than any comparable generator at only 30ps.

Frequency Counter/Timer
The frequency counter function allows external signals to be measured in terms of frequency, period, pulse width or duty cycle. The frequency range is 0.1Hz to 125MHz with a measurement resolution of up to seven digits. Both generator channels remain operational when the counter is is use.

PRBS Generator
PRBS (Pseudo-Random Bit Sequence) is a binary waveform type that is widely used within secure communications systems. PRBS is offered with a choice of 8 sequence lengths at rates between 1mbps and 50Mbps. PRBS can be used as both a carrier waveform and a modulation.

Harmonics Generator
The harmonics generator function built into the TGF3162 enables waveform to be created by the addition of sine wave harmonics. Up to 16 harmonics can be used, chosen from up to the 50th order. The amplitude and phase can be individually set for each harmonic.

* The four model-specific features can be added to the TGF3082 by software unlocking (option GU3082).