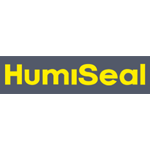 Cleanliness of the substrate is of extreme importance for the successful application of a conformal coating. Surfaces must be free of moisture, dirt, wax, grease, flux residues and all other contaminants. Contamination under the coating could cause problems that may lead to assembly failures. Although its formulation allows HumiSeal 1A20™ to be applied using a wide variety of methods, care should be taken to ensure that it is only applied in an environment where the ambient relative humidity is at 60% or less. Application of the coating when the RH is higher than 60% can cause acceleration of the cure reaction, resulting in bubbles in the dried film.

Dipping Depending on the complexity, density and configuration of components on the assembly, it may be necessary to reduce the viscosity of HumiSeal 1A20™ with HumiSeal Thinner 521 in order to obtain a uniform film. Once optimum viscosity is determined, a controlled rate of immersion and withdrawal (5-15 cm/min) will further ensure even deposition of the coating and ultimately a uniform film. During the application, evaporation of solvent causes an increase in viscosity that should be adjusted by adding small amounts of HumiSeal Thinner 521. Viscosity in the dip tank should be checked regularly, using a simple measuring device such as a Zahn or Ford viscosity cup.

Spraying HumiSeal 1A20™ can be sprayed using conventional spraying equipment. Spraying should be done in an environment with adequate ventilation so that the vapour and mist are carried away from the operator. The addition of HumiSeal Thinner 521 is necessary to ensure a uniform spray pattern resulting in pinhole-free film. The amount of thinner and spray pressure will depend on the specific type of spray equipment used and operator technique. The recommended ratio of HumiSeal 1A20™ to HumiSeal Thinner 521 is 5:2 by volume, however the ratio may need to be adjusted to obtain a uniform coating.

Brushing HumiSeal 1A20™ may be brushed with a small addition of HumiSeal Thinner 521. Uniformity of the film depends on component density and operator's technique.