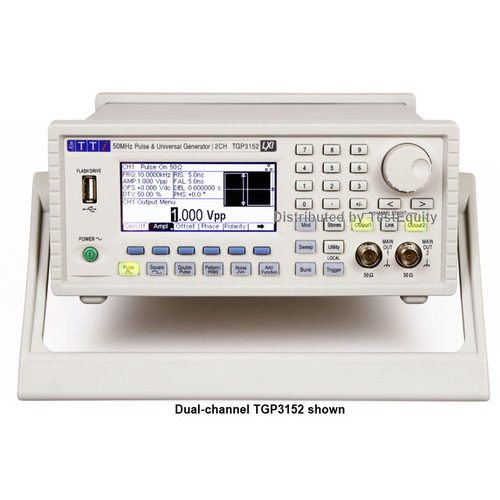 True Pulse Generators
The TGP3151 is a true pulse generator using all digital techniques. It can replicate the capabilities of traditional pulse generators while adding many additional facilities such as pulse modulations.

Unlike DDS based function generators the TGP3151 can generate pulses up to 50 MHz with very low jitter and high resolution of width and delay (100ps). It can also operate in an asynchronously triggered mode with low jitter.

A high drive capability output stage enables up to 20 volts pk-pk to be driven into a 50 Ohm load.

Universal Waveform capabilities
As well as operating as pulse generators, the TGP3151 can act as high performance noise generator and as function/arbitrary generator — making it a truly universal waveform generator.

Waveform Manager Plus
Waveform Manager Plus (version 4) is a Windows® based application for creation, editing and management of arbitrary waveforms and pulse patterns using a PC. Any instrument or waveform generating program that can create a list of Y values can therefore be accommodated.

It incorporates a complete suite of tools for waveform creation and editing including standard waveforms, mathematical expressions and freehand drawing.