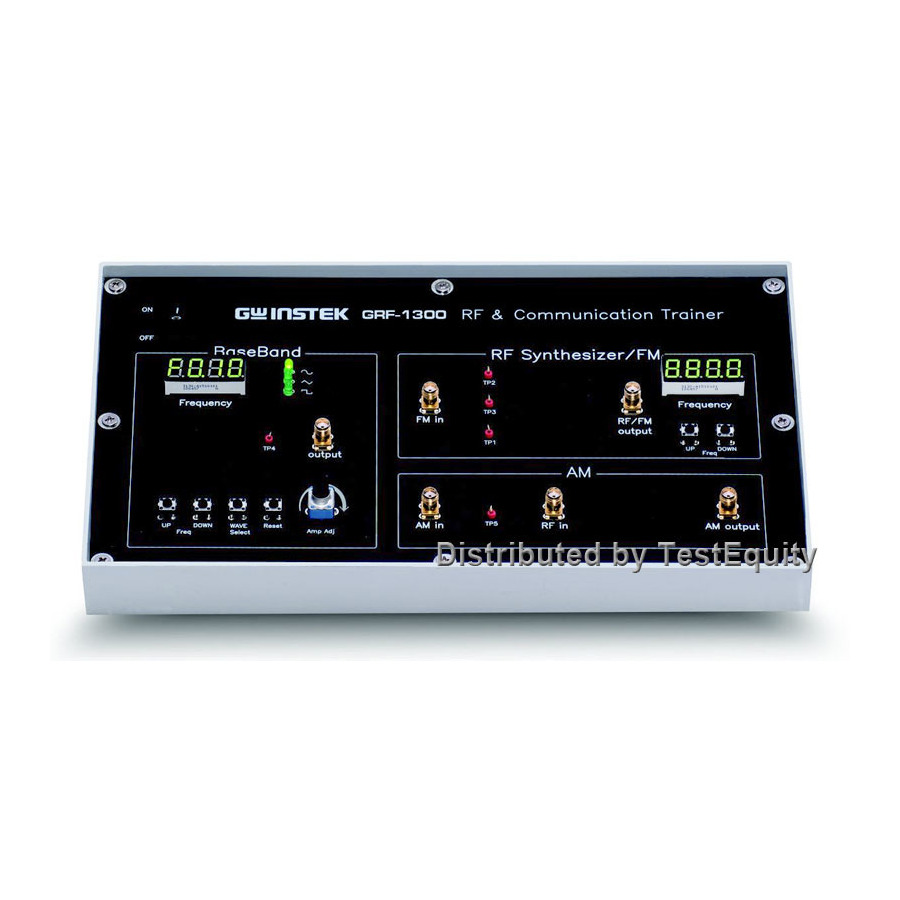 The GRF-1300/GRF-1300A are training kits. Along with the GSP-730 Spectrum Analyzer they make up a training system solution to solve the Educator's toughest challenges — lack of budget and the presence of affordable teaching tools. In conjunction with a PC, a teacher can now present a Fundamental RF Communication Course with Microsoft PowerPoint presentation and control and perform the associated experiments on the GSP-730 simultaneously. A VGA output transfers screen images to a projector or larger screen display.

The GRF-1300/GRF-1300A are able to generate a baseband signal and a RF Carrier signal for the built-in AM/FM Communication topics. The baseband signal outputs include Sine, Triangle and Square waveforms in 100kHz to 3 MHz range and RF output in the 870 MHz to 920 MHz range.

The combination of the GSP-730 and GRF-1300/GRF-1300A forms a fundamental training system for RF communications and telecommunications classes. GRF-1300/GRF-1300A, as an optional accessory of GSP-730, is a trainer for basic RF communication experiments. The GRF-1300 generates a baseband signal and a RF carrier signal for the built-in AM and FM communication operations. The baseband signal output includes the selections of Sine, Triangle, and Square waveforms in the frequency range of 100 kHz to 3 MHz, whereas the RF signal output is a frequency-variable Sine wave in the range of 870 MHz to 920 MHz.

When the GRF-1300/GRF-1300A Trainer and a PC are properly connected, a tangible system is integrated for performing on-the-fly experiments while the lecture is being given. Using a PC, the teacher can present teaching material with PowerPoint files and at the same time control GSP-730 and GRF-1300/GRF-1300A to perform experiments and get spectrum displays and parameter readings on the PC screen. A PowerPoint file teaching material, a remote control software, and student and teacher's textbooks are available to support this E-teaching system.