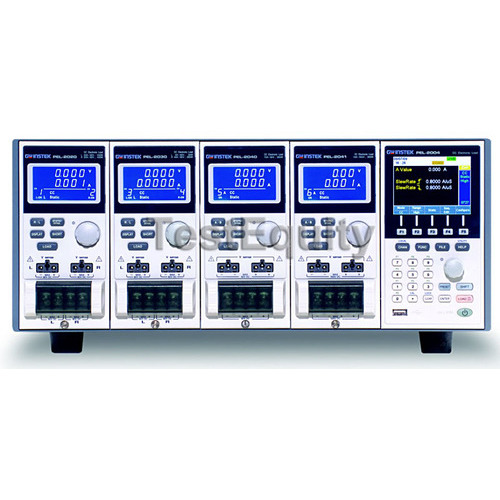 The Sequence function allows each channel to change its load sink according to a predefined sequence at a rate of up to 100 s per step. Each sequence is able to run concurrently under the control of one clock. This is one of the most powerful features of the PEL-2000A ASeries as it is able to realistically simulate a multi-output power supply load. Under Dynamic mode, the load current or load resistance pulses between two preset levels at a pre-defined speed up to 25 s per step. This is often used as the standard test procedure to verify the response of a power supply to quick load changes. Most remarkably, multiple load channels can be connected in parallel to run Dynamic tests synchronously under a single clock. This Parallel Dynamic functionality gives the flexibility to perform dynamic tests for a high-power power supply without the need of another high-power load.

The Go/NoGo function is available to monitor test results all the time. When a test result goes beyond a preset limit range, a "No Go" indication will be shown on the display and a "No Go" signal can be sent out through the D-SUB interface for external device control. This Go/NoGo function is available for CC mode, CV mode, and CR mode. Under "Program" mode, 12 programs, each containing 10 panel setup memories, can be edited to create work routines for repetitive tests. After a program has been executed, the results of all test steps, along with the Go/NoGo judgments, will be shown on the screen.

For external control and system configuration, the PEL-2000A series has USB and RS-232 interfaces as standard and GPIB as an option. The LabView driver and Data Logging PC software are both supported for all the available interfaces. Each channel has an analog control/monitoring connector on the rear panel to externally turn a load on/off and to externally monitor load input current and voltage.