Two DMM7510s built into one compact enclosure
The DMM7512 consists of two, independent, identical Keithley 7-1/2 digit DMM7510 digital multimeters with a few fewer measurement functions. The two DMM7512 DMMs have the same accuracy, sensitivity, and speed as the DMM7510 so that the DMM7512 can be seamlessly integrated into a test system that previously used DMM7510s.

1U high, full rack wide form factor chassis
Compared to two 2U high DMM7510s, you can get twice the measurement capability in half the space. The compact chassis saves rack space in high-instrument density test systems without compromising measurement performance. Each DMM has identical functionality, and they are entirely independent of each other.

Significantly reduce test time
The two DMMs in each DMM7512 have built-in intelligence to execute test programs without PC interaction using its Test Script Processor (TSP®) Technology. In addition, each DMM features a TSP-Link® hardware interface so that one instrument can control other instruments in a master-subordinate configuration. 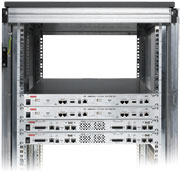 Double test system density
Save valuable rack space with two DMMs in a 1U high rack space. Compared to two 2U high DMM7510s, you can get twice the measurement capability in half the space.

DMM7512 Expansion Interface
The TSP-Link expansion interface allows TSP-enabled instruments to trigger and communicate with each other.

The DMM7512 has four TSP-Link connectors (two on each module) to make it easier to connect instruments in a sequence.