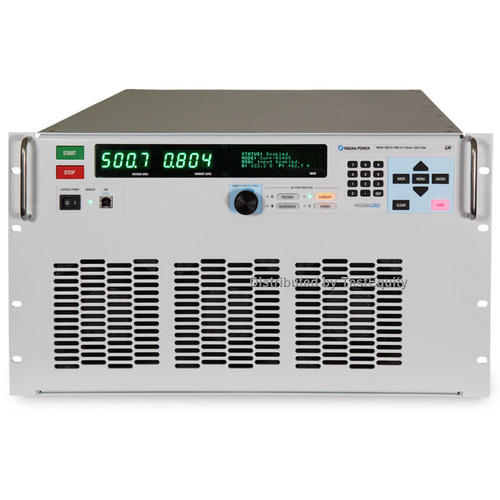 Many Control Modes
To accommodate a variety of DC sources, all ARx Series MagnaLOADs come with several distinct control modes, including: Voltage Mode, Current Mode, Power Mode, Resistance Mode, Shunt Regulator Mode, and Rheostat Mode. Preference for DC regulation is given to the parameter in the selected mode within the programmed set-points. Using the MagnaLOAD's set-points and trip settings, the product can configured to either trip with a fault when a limit is exceeded or to cross-over into a different regulation state.

Shunt Regulator Mode turns the MagnaLOAD into a high-speed smart braking resistor, engaging the DC input only when a specified voltage is exceeded by a user-defined percentage, while limiting the shunt current to a programmed set-point.

Integrated Arbitrary Waveform Generation  (This is planned feature, and will be available via a future firmware update.)
All MagnaLOADs provide four user programmable arbitrary waveforms. Each arbitrary waveform can consists of up to 1024 points, each point with the following settings:

With the integrated arbitrary waveform generation, the MagnaLOAD can easily be used to provide a wide range of user-generated waveforms including step load transitions or pulsed DC loading.

Extensive Programming Support
All ARx Series MagnaLOADs come with a dedicated National Instruments LabVIEW™ driver, Interchangeable Virtual Instrument (IVI) driver, and support for a wide range of Standard Commands for Programmable Instrumentation (SCPI). These programming interfaces support full control, measurement, and monitoring of the MagnaLOAD. All of the MagnaLOAD's available communication interfaces are supported by these drivers and command sets, including: USB, RS485, LXI TCP/IP Ethernet, and IEEE-488 GPIB.

ARx Series Air-Cooled Active Resistance DC Electronic Load Models
There are many possible configurations for the ARx Series product. Use the ordering guide and models chart to the right to define the best model for your application.