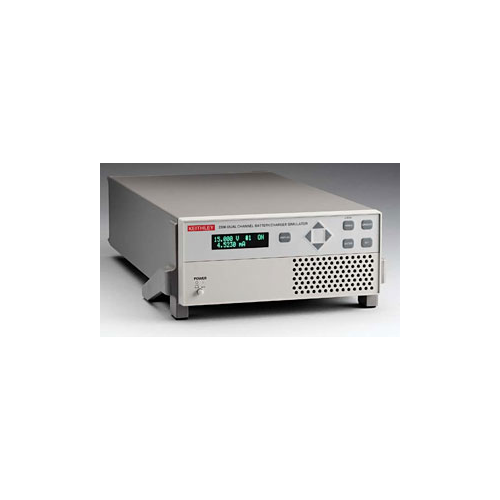 The dual-channel Keithley 2306 Battery/Charger Simulator was designed specifically for development and test applications of portable, battery-operated products, such as cellular and cordless telephones, mobile radios, and pagers. These precision power supplies have ultrafast transient response so they can have output characteristics identical to actual batteries. These supplies employ a unique variable output resistance so the voltage output can emulate a battery's response (U.S. Patent No. 6,204,647). They provide stable voltage outputs, even when a device-under-test (DUT) makes the rapid transition from the standby (low current) state to the RF transmission (high current) state. In addition, they can monitor DUT power consumption by measuring both DC currents and pulse load currents. Keithley 2306 has a battery-simulator channel that can be programmed to operate like a discharged rechargeable battery, sinking current from a separate charger or from the Model 2306's charger-simulator channel.

The dual-channel Keithley 2306-VS Battery/Charger Simulator with External Triggering is designed specifically for development and high speed production testing of DC battery-operated products, such as cellular handsets, cellular components like RFIC power amplifiers, and other high volume precision electrical components that require a DC voltage supply.